Migraine is a neurological syndrome characterized by altered bodily perceptions, headaches and nausea (vomiting sensation). The typical migraine headache is unilateral and pulsating, lasting from 4 to 72 hours; approximately one third of people who suffer migraine headache perceive an aura (the perceptual disturbance or symptom experienced by some migraine sufferers before a migraine headache) - announcing the headache.

How many types are Migraine

Familial hemiplegic migraine: is migraine with a possible genetic cause.

Patients having migraine before or during the menstrual periods.

is characterized by migraine lasting more than 72 hours, with not more than four hours of relief during that period.

Signs and symptoms of migrain

The signs and symptoms of migraine vary among patients. The four phases of a migraine attack listed below are common but not necessarily experienced by all migraine sufferers.

The prodrome, Which occurs hours or days before the headache. This phase may consist of altered mood, irritability, depression, fatigue, yawning, excessive sleepiness, craving for certain food (e.g. chocolate), stiff muscles (especially in the neck), constipation or diarrhea, increased urination and other visceral symptoms.

The aura, which immediately precedes the headache. This comprises focal neurological phenomena that precede or accompany the attack.

headache is unilateral, throbbing and moderate to severe and can be aggravated by physical activity. The pain may be bilateral at the onset or start on one side and become generalized and usually alternates sides from one attack to the next. The onset is usually gradual.

Other features invariably accompany is the pain of migraine. Nausea occurs in almost 90 percent of patients, while vomiting occurs in about one third of patients. Many patients experience sensory hyper excitability manifested by photophobia (symptom of excessive sensitivity to light and the aversion to sunlight), phonophobia (a fear of loud sounds), osmophobia (fear, aversion or psychological hypersensitivity to smells/odors) and prefer to be in a dark and quiet room. 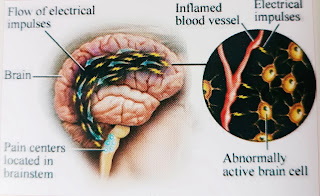 The patient may feel tired; have headache, cognitive difficulties, gastrointestinal symptoms, mood changes and weakness. Some people feel unusually refreshed or euphoric (an emotional and mental state defined as a sense of great elation and wellbeing) after an attack, whereas others note depression and malaise. Often, some of the minor headache phase symptoms may continue, such as loss of appetite, photophobia and lightheadedness.

Migraines are thought to be caused by changes in the chemicals of the brain particularly of chemical called serotonin which decreases during a migraine. Low levels of serotonin can make the blood vessels in a part of the brain spasm (suddenly contract), which makes them narrower. This may cause the symptoms of aura. Soon after, the blood vessels dilate (widen), which is thought to cause the headache. The reason for the drop in serotonin is not yet fully understood. Menstrual migraine is experienced by women before having their period which is due to fall in oestrogen hormone levels.

Migraine attacks are associated with various trigger factors. They are:

Physical: They include tiredness, poor quality of sleep, shift work,

They include lack of food (dieting), delayed or irregular meals, dehydration, alcohol, food additive tyramine, caffeine products, such as tea and coffee, specific foods such as chocolate, citrus fruit and cheese. When the person does not eat regular meals, the blood sugar levels fall. When a person eats a sugary snake, blood sugar levels shoot up. These 'peaks and troughs' could trigger migrain attacks.

Environmental: They include bright lights, flickering screens, such as a television or computer screen, smoking (or smoky rooms), loud noises, changes in climate, such as changes in humidity or very cold strong smells, a stuffy atmosphere.

Some medicines that can trigger migraine, includes some types of sleeping tablets, the pill, hormone replacement therapy (HRT), which is sometimes used to treat the menopause. 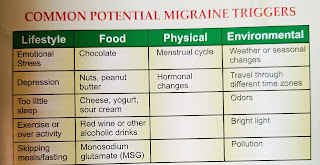 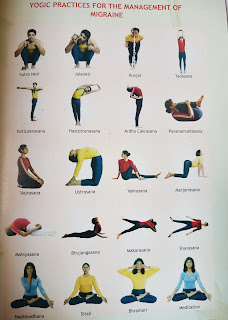 Medical treatment focuses on three areas: trigger avoidance, symptomatic control and prophylactic pharmacological drugs. Patients who experience migraines often find that the recommended migraine treatments are not 100% effective at preventing migraines and sometimes may not be effective at all.

The simple task of starting a diet journal to help modify the intake of trigger foods like chocolate, cheese and ice cream could help alleviate symptoms.

Many physicians believe that exercise for 15-20 minutes per day is helpful for reducing the frequency of migraines. Sleep is often a good solution if a migraine is not so severe.

The practices which are helpful in the management of Migraine are as under:

focusing on the effected part.

You may be able to reduce frequent migraines by avoiding triggers, such as certain foods, stress, and changes in your daily routine, although it is not clear how or why these events lead to migraines. Some common triggers of migraines include:

*Getting too much or not enough sleep.

*Changes in the weather or barometric pressure.

Disclaimer: This literature is for general awareness about disease management through Yoga. It should not be considered as treatment prescription.