Sanskrit name: Yashtimadhu
Latin name: Glycyrrhiza glabra English name: Licorice
Other Sanskrit Names and Their Meaning
The various Sanskrit names signify the character- istic features and properties of G glabra. A few of the names and meanings are as follows:
Yashtimadhu
"Yashti" means a stick (indicating the root or stem here), and "Madhu" means sweet taste. The name refers to the sweet root or stem of the herb.
Kleetanaka/ Kleetaka
"Kleeta" means weakness. "Kleetanaka" refers to the beneficial role of this herb in treating the disorders of the male reproductive system.
Madhura Valli
"Madhura" means sweet taste, and "Valli" means a creeper, thus indicating that this herb is a sweet-tasting creeper.
Madhura Lata
"Madhura" means sweet taste, and "Lata" means a creeper. Thus, the name indicates that the herb is a creeper with a sweet taste. 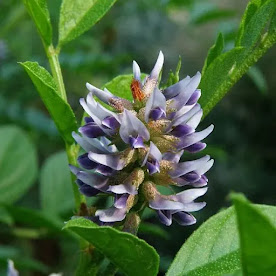 . The traditional folk healers of Tiptur (Karnataka, India) grind the leaves of Glycyrrhiza glabra along with nutmeg, cardamom, flowers of white Dead Nettle, and sugar candy into a paste and consume with rice washed water for 3 to 4 days to treat leukorrhea in women.
The traditional practitioners at Burdwan (West Bengal, India) use the paste of tender leaves of G glabra to treat skin problems.
The tribals of East Godavari district (Andhra Pradesh, India) use the root of G glabra as a shampoo to support hair growth and control hair fall.
The traditional medical practitioners of Kerala (India) use a decoction of G glabra leaves and other herbs to treat dysmenorrhea.
In Himachal Pradesh (India), the decoction of G glabra along with cardamom and Banafsha (Sweet Violet or English Violet) is used to manage cough and cold in pregnant women.
The tribal community at the Pakistan-Afghanisthan border use the root powder of G glabra with milk for improving lactation.
⚫ In Iranian traditional medicine, G glabra is used to treat digestive and respiratory ailments and female infertility.
Morphology
G glabra is an herbaceous, perennial plant that grows to a height of 0.5-m to 1.5-m tall. The stem is woody at the base, densely glandular, and punctate with stoloniferous roots. The leaves are imparipinnate with ovate-oblong, oblong-lanceolate, or elliptic leaflets. The flowers comprise purple or pale whitish blue petals and are arranged in an open, racemose inflorescence. The fruits are flat, oblong, glabrous, or sparsely hairy legumes containing 2 to 8 dark green, smooth seeds.

The roots of G glabra comprise some of the most impor- tant bioactive compounds such as glycyrrhizin, flavo- noids, saponins, triterpenes, sugars, sterols, amino acids, gums, and essential oils.'

G glabra is known to possess a diverse range of pharmacologic actions including antimicrobial, antiviral, antipyretic, anti-inflammatory, hypolipi- demic, antiatherosclerotic, hypotensive, antiulcer- ogenic, hepatoprotective, spasmolytic, antidiuretic, and antimutagenic properties.
A study was conducted to evaluate the anti-inflam- matory effect of isoliquiritigenin (ISL) of G glabra on skin ischemia-reperfusion injury (I/R) in rats. The injury was developed on Wistar rats by creating an axial pattern skin flap of 3 x 6 cm. The rats were divided into a control group, a group without treat- ment, and 3 test groups.
The test groups received ISL in 10% carboxy methylcellulose at 10, 20, and 30 mg/kg, respectively, by intraperitoneal injection in the right lower abdomen on days 2, 4, and 6 after surgery.
On day 7 of the experiment, the skin flap was evaluated for color, texture, hair growth, tissue elasticity, necrosis, skin tissue histopathology, apoptosis, antioxidant enzymes, proinflamma- tory cytokines, and expression of cyclooxygenase (COX)-2 and nitric oxide synthase (NOS). The results revealed that ISL exerted a protective, anti- inflammatory effect against I/R by significantly improving skin survival and inhibiting inflamma- tion, oxidative stress, apoptosis, and COX-2 and ¡NOS expressions.'
Another study evaluated the antioxidant effect of G glabra in alleviating hepatotoxicity and f hematoxicity in rats. The white Albino male rats were randomized into 7 groups. Group 1 (control) received oral isotonic saline solution. Groups 2 and 3 received hydroethanolic extract of G glabra at 100 and 200 mg/kg body weight. Group 4 rats received intraperitoneal injections of thioacetamide (TAA). Groups 5 and 6 received G glabra extract at doses of 100 and 200 mg/kg body weight, followed by TAA, at the same dosage, intraperitoneally.
Group 7 received a standard hepatoprotective drug, orally (50 mg/kg body weight), followed by intraperito- neal TAA at 100 mg/kg body weight. All the treat- ments were done biweekly for 30 days. At the end of the treatment, blood samples were collected and subjected to biochemical and hematologic analyses.
Liver samples were collected for histo- pathologic studies. The findings showed that the treatment with G glabra extract at 200 mg/kg body weight normalized the levels of serum biochemicals and oxidative stress markers and the hematologic profile, and improved the histopathologic lesions in the liver. The results suggest that G glabra has the potential to prevent TAA-induced hepatotoxicity and hematoxicity in rats.

• Charaka Samhita, an ancient treatise of Ayurveda, has mentioned Yashtimadhu among "Varnya Gana", a group of 10 herbs known for improving complexion and promoting skin health. Yashtimadhu, as a single ingredient or in combination with the other ingredients listed, is recommended for use as a topical applica- tion or as an oral medicament for enhancing complexion.
• The popular Ayurvedic formulations, Kanaka Taila and Kumkumadi Taila, have Yashtimadhu as a key ingredient. These oil preparations are recommended for facial massage or topical application in pigmentation disorders and acne and for improving complexion and promoting skin health.
Ayurvedic texts also mention the use of Yashtimadhu (in the form of ghee, oil, or lepa [paste for topical application]) to control hair fall, graying, and dandruff.
• The popular Ayurvedic preparation Yashtimadhuka Taila is known to improve hair growth when instilled nasally.

G glabra is used as an additive in the food industry because of its sweetness. The root is used as a flavoring agent in chewing gums, candies, baked foods, ice creams, and soft drinks.

G glabra was a well-known remedy during the ancient Roman times and was well documented by several Roman authors; its reference is found in the monumental work Naturalis Historia.
In the European culture, G glabra was popularly known as the Scythian root, as it was used by an ethnic group called the Scythians from the Siberian region. It is believed that the Scythians consumed G glabra root before crossing deserts to suppress thirst and reduce fluid loss. They would survive in the desert for 11 to 12 days without water and by consuming only G glabra root.
Ref. Various medicinal journal