What is Alcohol Dependence

Alcohol dependence means drinking excessively i.e. more than the recommended limits of alcohol consumption. It is a condition characterized by the harmful consequences of repeated alcohol use, a pattern of compulsive alcohol use, and sometimes physiological dependence on alcohol (i.e., tolerance and/or symptoms of withdrawal). This disorder is only diagnosed when these behaviors become persistent and very disabling or distressing. Alcohol consumption can result in the impairment of social, legal, interpersonal and occupational functions. It can lead to a number of harmful physical and psychological effects, such as alcohol poisoning, cirrhosis of the liver, inability to work and socialise and destructive behaviors, such as drink-driving. 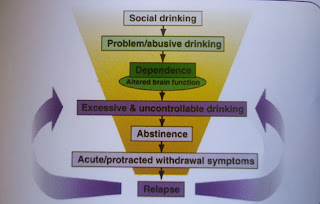 Restriction to one type of alcohol

Priority of drinking over other activities

Tolerane to the effects of alcohol

Reinstatement of drinking behaviour after abstinence.

Very high alcohol content in the blood can be fatal. Sudden death can occur as a result of respiratory depression or cardiac arrhythmias. The short-term risks of alcohol misuse include:

Alcohol poisoning - this may lead to vomiting, seizures (fits) and falling unconscious

Accidents and injuries - requiring hospital treatment, such as a head injury.

Violent behaviour - that might lead to being arrested by police.

Loss of personal possessions such as wallets, keys or

Heavy drinking can also increase your blood pressure and blood cholesterol levels, both of which are major risk factors for heart attacks and strokes. Long-term alcohol dependence can weaken the immune system, making body more vulnerable to serious infections. If can also weaken the bones, which increases risk of fracturing. Some of the conditions that occur due to chronic effect of alcohol dependence are:

Sexual problems, such as impotence or premature ejaculation and infertility. 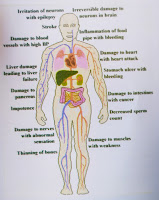 As well as having a significant impact on your health, alcohol misuse can lead to:

Alcohol dependence treatment depends on how much alcohol a person is drinking. Treatment options include:

. consists of treatment of long term effects of alcohol, managing signs and symptoms of alcohol withdrawal state and maintenance of abstinence through medication and reassurance. It involves a nurse or doctor supporting the person to safely stop drinking; this can be done by helping the person to slowly cut down over time or by giving the medicines to prevent experiencing of withdrawal symptoms.

Medication - There are two main types of medicines to help people stop drinking; the first is to help stop withdrawal symptoms and is given in reducing doses over a short period of time; the most common medicine that's used in this way is called chlordiazapoxide; the second is medication to reduce any urge, person may have to drink; the most common medications used for this are acamprosate and naltrexone. These medicines are given at a fixed dose and person will usually be on them for 6-12 months. 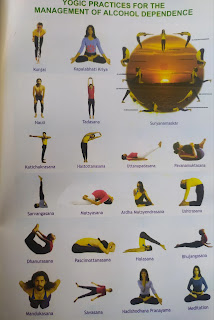 The line of treatment should be to manage the withdrawal symptoms of the alcohol dependence. Also, the craving for the alcohol has to be retarded. In the meantime the symptoms otherwise developed have to be taken care. The yogic practices that are useful in these cases are:

a. Yoga Nidra will be helpful as this practice is believed to act on the subconscious level to bring about a state of homeostasis in the body and mind.

b. In case of acute gastritis, the kunjal and vastradhouti may be avoided.