over the years, there has been a growing realization that harmful effects can result from free radical processes ocuring in biological system. With this realization and with a better understanding of the function of vitamin e.there has been a renewed interest in a- tocopherol,the most potent biological and antioxidant form of the vitamin. Vitamin E is a term that encompasses a group of potent,lipid-soluble,chain-breaking antioxidants.Structural analysis have revealed that molecules having vitamin E antioxidant activity include four tocopherols and four tocotrienols tocopherol is the predominant form of vitamin E in blood, no matter what the composition of the diet,because of the preferential uptake of vitamin E transport proteins a- tocopherol is the most common fat soluble vitamin in  human blood,with concentration ranging from 15 to 40 mg/l

It is an essential nutrient for humans and most animal species, especially early in life, vitamin E deficiency is characterised by muscular dystrophy. Neurological abnormalities is rare and observed in premature infants and people of all ages with chronic fat malabsorption. Vitamin E was discovered in 1922 by Evans and Bishop as a compound required for reproduction of rats.since then,many scientists and physicians have sought to elucidate its biochemistry, health benefits and clinical applications and innumerable attempts have been undertaken to finally find out why vitamin E is an essential micronutrient in humans. Even almost 90 years of its discovery, however the real biological role of vitamin E remains enigmatic. Oxidative stress in biological systems originates as a result of an imbalance between the generation of oxidizing species and cellular antioxidant defenses.
Numerous enzymatic and non-enzymatic mechanism take place to protect the cell against oxidative damage. The radical chain reaction of lipid peroxidation appears to be a continuous physiological process.
The process, if out of control,can alter essential cell functions and lead to cell death. In 1937 the antioxidant action of vitamin E was described for the first time.vitamin E a free radical scavenger is a major contributor to non- enzymatic protection against lipid peroxidation.vitamin E as a lipid soluble, chain-breaking antioxidant plays a major protective role against oxidative stress and prevents the production of lipid peroxides by scavenging free radicals in biological membranes.

Studies have also revealed that vitamin E possesses an antioxidative activity in protecting cells from damage by highly reactive superoxide free radicals. The antioxidant activity of vitamin E has persuaded many groups to study its ability to prevent chronic diseases, especially those believed to have an oxidative stress component such as cardiovascular diseases, atherosclerosis, and cancer. Epidemiological studies have reported that high Vitamin E intakes are correlated with a reduced risk of cardiovascular diseases, whereas intakes of other dietary antioxidants (such as vitamin c and b-carotene) are not,suggesting that vitamin E plays specific roles beyond that of its antioxidant function.The possibility that vitamin E has an ameliorative effect in chronic disease has spurred interest in determining its specific molecular functions and whether these are related to its antioxidant function.

Infertility affects approximately 15% of all couples trying to conceive. It's major clinical problem, affecting people medically and psychologically.male factor infertility is the major cause in roughly half of the cases,and identifiable cause can be found in over 25% of infertile males.Out of many causes of male infertility, oxidative stress has been attributed to affect the fertility status and thus ,it has been studied extensively in recent years.
Numerous studies have been reported beneficial effects of antioxidant drugs on semen quality. This study aimed to test the effect of vitamin E and selenium supplementation on lipid peroxidation and on sperm parameters. 28 men were supplemented daily by vitamin E and selenium during 3 months. The remaining 26 patients received vitamin B for the same duration. In contrast of vitamin B supplementation. Vitamin E and selenium supplementation produced a significant decrease in MDA(malondialdehyde) concentration and an improvement of sperm motility. The result confirm the protective and beneficial effects of vitamin E on semen quality and advocate their use in male infertility treatment.

fibrosis is the formation of scar like (fibrous) tissue, and cysts are fluid filled sacs.These conditions are most often diagnosed by a doctor based on symptoms, such as breast lumps,swelling and tenderness or pain.These symptoms tend to be worse just before a woman's menstrual period is about to begin.Her breasts may feel lumpy and sometimes, she may notice a clear or slightly cloudly nipple discharge. most breast lumps are not cancerous (benign).still, some may need to be sampled and viewed under a microscope to prove they are not cancer.

Most lumps turn out to be caused by fibrosis and cysts, benign changes in the breast tissue that happen in many women at some time in their lives.

• localisation of vitamin E in membranes protects tissue against the harmful effects of free radicals generated during normal metabolic process, such as steroid synthesis.

• vitamin E helps in reduction of lump size and decreases the tenderness of breast.

Nocturnal leg cramps are pains that occur in the legs during the night.They usually cause awakening from sleep,but they may also occur while awake at night during periods of inactivity.These cramps are most often present in the calf muscles but can also occur in the thighs or feet.

Leg cramps also known as intermittent claudication is caused due to less blood flow through arteries due to clogging.

• vitamin E increases the production of substance that can increase the dilation of blood vessels, according to a new in vitro study. 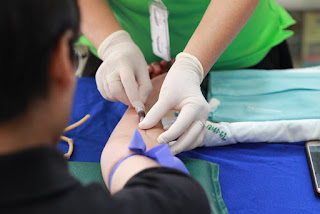